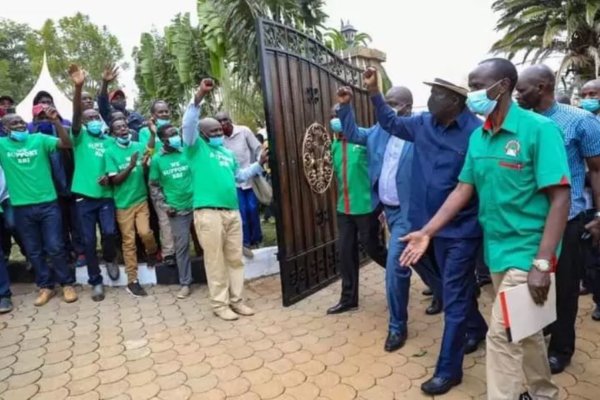 Bomet County residents did not want to miss the rare opportunity of listening to the enigma of Kenyan politics and so they came in numbers.

In attendance were several KNUT officials and close friends of Wilson Sossion who donned the green shirt that is synonymous with the giant teachers’ union. The KNUT officials and Sossion himself welcomed the chief guest Raila Odinga who was received with a lot of enthusiasm.

When attending such events, Raila knows very well that he has to make a serious political statement as he still has dreams of occupying the house on the hill. That is why he was accompanied by several other leaders including the Central Organisation of Trade Unions (COTU-K) Secretary-General Francis Atwoli.

The leaders heaped praises to the KNUT Secretary-General for giving his daughter a quality education. His daughter has now been admitted to the bar.

As expected, Raila had to say something about the Building Bridges Initiative. He said that the campaigns for the referendum will kick off immediately the COVID-19 pandemic subsides. However, the former prime minister was forced to cut short his speech immediately after taking the podium due to heavy downpour. It rained cats and dogs.

The enthusiastic residents who came to witness the auspicious occasion were forced to scamper for shelter. Generally, the even was a very colorful one and Raila presented the young lady with the gift that he had for her.

We recognize education as a key enabler of economic development. Towards this end, I joined the family of KNUT Secretary General Hon. Wilson Sossion to celebrate their daughter Rosemary’s admission to the Bar. pic.twitter.com/3Plgvqkxbm