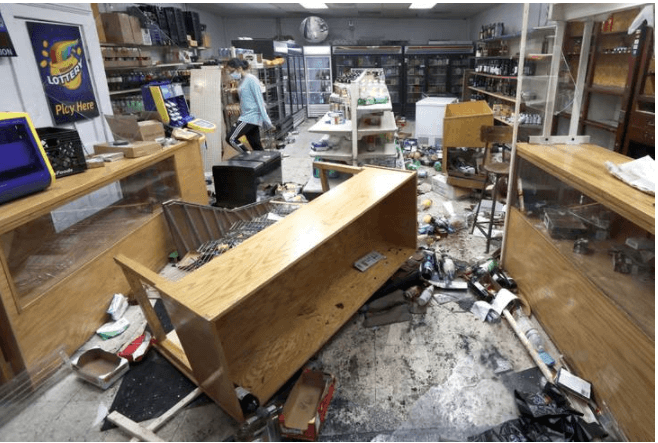 On Wednesday night, a huge crowd broke windows before looting stores in Minneapolis after allegations emerged that a black died after policed trailed him

However, it has turned out that the man who is a suspect in a murder case shot himself to avoid arrest

“When I got down here witnesses told me that a man that was wanted for a homicide at 2 o’clock earlier today was approached and did not want to be taken in and took his gun out and shot himself,” community activist KG Wilson told  CBS Minnesota.

“We keep trying to tell the crowd this… but they [weren’t] listening at the time because of past distrust, which I understand.”

“But yes, we have seen the video with our own eyes that this man who actually, I’m told, killed somebody at 2 o’clock today was not wanting to be apprehended and shot himself,” Wilson added. “So, I need anybody watching this to stand down and do not go tearing up the city.”

More looting in downtown Minneapolis. They’ve now breached the Saks 5th Avenue store on 6th and Nicollet and people are making out with lots of goods. pic.twitter.com/tgUIyoIMvf

BLM are rioting and looting in Minneapolis again after a murder suspect committed suicide. The rioters are falsely claiming police killed him. There’s a graphic video proving what happened. They don’t care. pic.twitter.com/hIN6YHGfWt

The recent Minneapolis looting and tension has emerged while protests have erupted in Wisconsin city of Kenosha where police shot a blake man, Jacob Blake, 29, seven times at the back