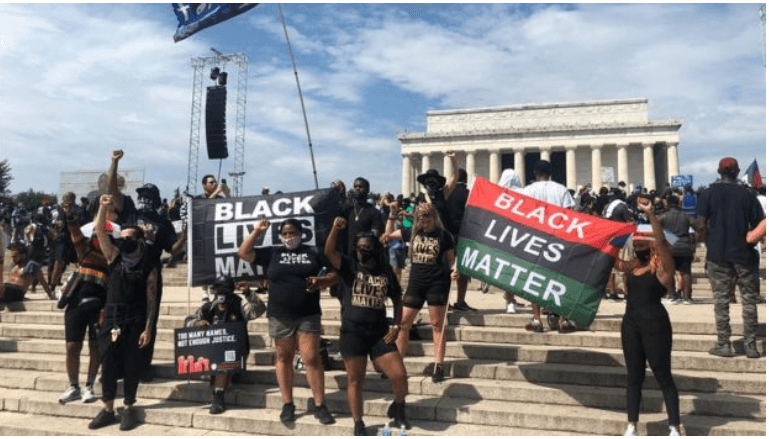 Thousands to participate in Washinton march on friday

KDRTV understands that the families of black Americans brutalized by the police will give a speech at the site where Martin Luther King Jr. delivered his “I Have a Dream” speech.

The Friday`s rally has been dubbed the Commitment March; Get Your Knee Off Our Necks, a reference to George Floyd Brutal killing by the police

The Washington rally will follow recommenced demonstrations over the cruel shooting of Jacob Blake, 29, by the Kenosha police

Among the people who will deliver a speech over police violence will include the relatives of r Blake, Mr. Floyd, Breonna Taylor and Eric Garner

READ ALSO: Police Allegedly Kill Another Man As Floyd Protests Continues in US

The protests have surfaced amid violent protests after Mr. Blake’s shooting inspired the death of two in Kenosha city.

Mr. Blake was shot seven times with Kenosha police who were allegedly responding to a domestic violence

While Mr. Blake is currently undergoing treatment, the police who involved in the shooting has been suspended

Mr. Blake is currently paralyzed and there is no hope he will recover, however, he is handcuffed to a hospital bed

“I hate it that he was laying in that bed with the handcuff on to the bed..”He can’t go anywhere. Why do you have him cuffed to the bed?” his father complained

Since the brutal killing of George Floyd, protests in support of Black Lives Matter has hit across the US and the world

The Friday`s March will bring together several activists, and advocates of police reforms will also be used to convince Americans to vote in the November general elections

The 57th anniversary of the 1963 event was organized by Martin Luther King III and National Action Network, organization owned by Rev. Sharpton

The rally organizers are concerned about the COVID-19 threats and have thus urged the people to participate virtually if they cannot attend or attend the local rallies in other states.

Temperature checks, face masks, and social distancing will be compulsory in the Washington March