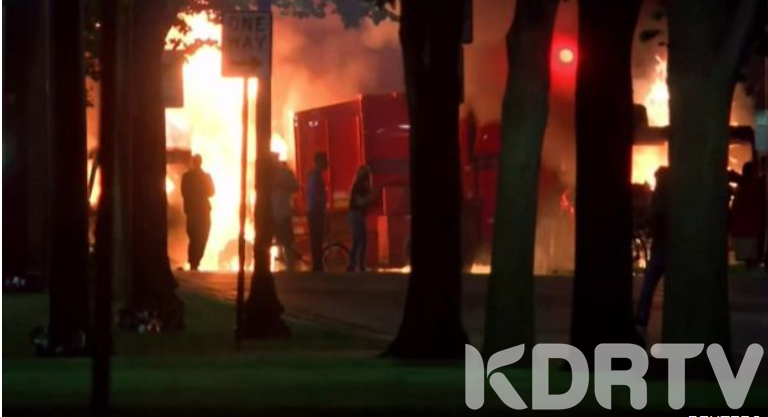 An Attorney general in Wisconsin has identified the officer who shot Jacob Blake on Sunday, prompting protests in the city of Kenosha.

Officers recovered a knife in Mr. Blake`s car, however, no other weapon was found

KDRTV notes that President Donald Trump stated that he is sending reinforcement to the US city of Kenosha in Wisconsin to calm tensions after the police shot Jacob Blake,29, on Sunday.

Hours after the announcement, the police have revealed that they have arrested a teenager aged 17 on suspicion of first-degree murder.

According to VOA, the teen fired gunshots that killed two people and wounded a third during the third night of protest in Kenosha city.

Reports indicate that the police arrested Kyle Rittenhouse at his home in Antioch, Illinois, which is about 24 kilometers from Kenosha city.

Kyle is being held in Illinois and his case will be heard on Friday; according to Wisconsin law, Rittenhouse would be charged as an adult.

Mr. Trump declared that he was sending  “federal law enforcement and the National Guard” to the city of Kenosha to halt the protests that entered the third day.

“We will NOT stand for looting, arson, violence, and lawlessness on American streets. My team just got off the phone with Governor Evers who agreed to accept federal assistance (Portland should do the same!),” he tweeted.

Shortly after the President’s statement, the Governor of Wisconsin announced that he had sent 500 National Guard troops to help control the situation in the city

Two people were fatally shot while one injured during a third-night protest at Kenosha city in the US State of Wisconsin following the shooting of a black man Jacob Blake, 29, by the police

According to our previous reports, Mr. Blake was shot by police as he leaned into his car while his children were in the vehicle`s back seat; in a now-viral video, the minors could be heard screaming

The Tuesday shooting involved protestors denouncing the brutal shooting of Mr. Blake by the Kenosha police

Since the beginning of such protests, many properties have been demolished as police engage demonstrators in running battles

At the same time, Mr. Blake`s lawyer said that it will take “a miracle” for the victim to walk again

“His family believe in miracles, but the medical diagnosis right now is that he is paralysed and, because those bullets severed his spinal cord and shattered some of his vertebrae, it is going to take a miracle for Jacob Blake Jr to ever walk again,” said the lawyer.

During the fateful day when Mr. Blake was shoot, the officers supposedly responded to domestic violence however, it is not yet clear what incited the shooting and how many police officers were involved

So far, Kenosha police have presented a statement in which they affirmed that officials responded to “reports of shots being fired and multiple gunshot victims” in Kenosha city at around 23:45 on Tuesday

“The shooting resulted in two fatalities and a third gunshot victim was transported to a hospital with serious, but non-life threatening injuries,” read part of the statement.

Another video shows armed civilians, majority dressed in military gear, crowding outside business they said they were safeguarding

Currently, America is struggling to neutralize racial unrest in the country after the black community claims that the police are targeting them because of their color.

During a Republic convention, Melania Trump during her speech called upon Americans to embrace racial equity

So far, KDRTV understands that the state of emergency has been declared in Wisconsin as the protests expand to other cities such as Portland and Minneapolis