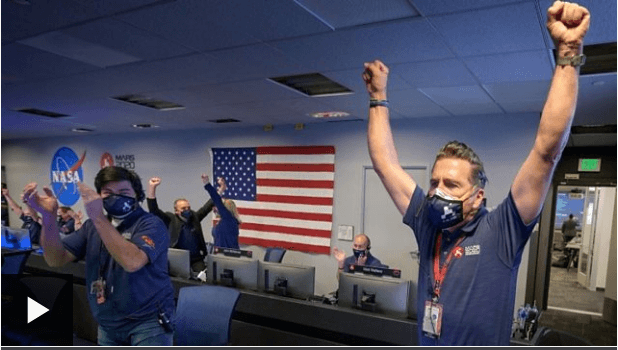 The good news is that the Perseverance rover landed on the planet in Good shape.

“The good news is the spacecraft, I think, is in great shape,” said Matt Wallace, the mission’s deputy project manager.

NASA`s engineers at the control center in California busted with joy upon the confirmation of the rover’s touchdown.

They have announced that the six-wheel vehicle will now stay on the planet for the next two years, drilling rock investing in the presence of past life.

The American scientists believe that Jezero could have held giant lake billions of years ago. Thus they believe where there is water, and there is the possibility that there might be life.

The US president Joe Biden has congratulated NASAs team saying that it has proved Americas power of science.

“Congratulations to NASA and everyone whose hard work made Perseverance’s historic landing possible. Today proved once again that with the power of science and American ingenuity, nothing is beyond the realm of possibility,” Biden wrote on twitter.

Congratulations to NASA and everyone whose hard work made Perseverance’s historic landing possible. Today proved once again that with the power of science and American ingenuity, nothing is beyond the realm of possibility. pic.twitter.com/NzSxW6nw4k

Director Mike Watkins said that there is something special about the few days of landing.

"There is something special about the first few days, because we have just landed a representative of the planet Earth on a place on Mars that no one has ever been to." – @NASAJPL director Mike Watkins on @NASAPersevere's view of Jezero Crater after its #CountdownToMars landing. pic.twitter.com/NzUGJp7wAc