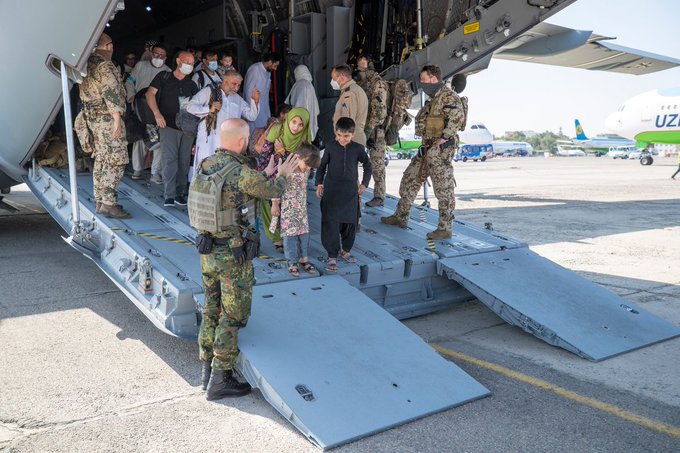 Western countries continue to evacuate afghans and their nationals from Afghan.

Recent reports indicate that the Taliban has been accused of blocking main routes to the Kabul airport.

This has prompted the United States to urge the Taliban to ensure safe passage to the airport.

KDRTV has also established that more flights have arrived in Germany from Kabul as the German government is being faulted for lack of adequate preparation.

Two places have landed at the Frankfurt Airport early Thursday with evacuees from Kabul.

At the same time, some 500 people were on board two charted planes that Lufthansa and Uzbekistan Airways operated.

The UK has warned that it will not evacuate unaccompanied children, the British Defense Secretary Ben Wallace to Sky News.

“We can’t just take a minor on their own,” Wallace said in the interview broadcast on Thursday morning.

The recent reports indicate that the Taliban guards have beaten the Afghans on the way to the Kabul airport.

The guards have been spread out in various manning points across the city.

President Ashraf Ghani had fled his country, Afghan, after the Taliban took over.

The president yesterday landed in the United Arab Emirates.

The president said that he left the country on the advice of his security team and decline reports that he fled with “cars full of cash.”

The IMF has blocked the Taliban from accessing its funds

However, the Flagwaing protestors have defied the Taliban, replacing their flags with the national flag.

This prompted the Taliban fighters to shoot some civilians in Jalalabad,

This comes after the United States said that all its citizens would be evacuated from Afghanistan following the humanitarian fallout since the Taliban took over the Afghan.

Spain has also confirmed that all of its nationals have left Afghanistan.

There are hopes that the G20 summit will be held to discuss the fate of the humanitarian fallout in Afghan.