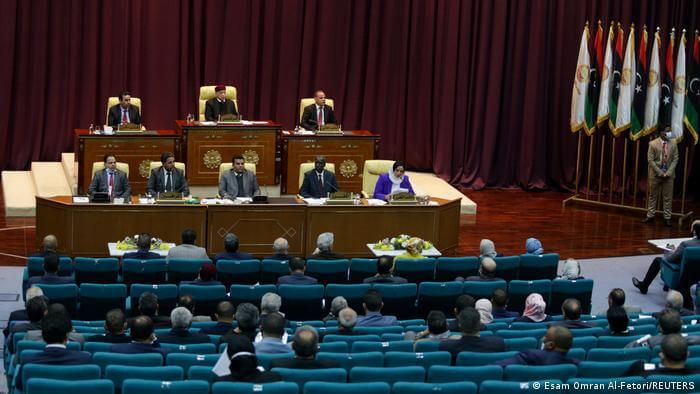 The triumph achievement by the war-torn country was made on Wednesday, February 10, 2021.

The scheme that the United Nations spearhead is meant to see the country through an election scheduled for the end of this year.

REA ALSO: the US Warns Russia, Turkey Military Stay In Libya Is Illegal

The speaker of the parliament Aguila Saleh, said that was a historic day for Libya.

“This a historic day for the House Representatives…The mandate of the government will last until December 24 when the presidential and legislative elections are held,” said the speaker.

KDRTV understands that after two days of liberation, the house voted 132-2 in favor of the unity government plan. Only 36 members were absent in the rare session.

The speaker said that through the voting process that okayed the government’s formation, Libya is now one.

He urged Libyans to let go of the grudges and listen to one another.

The plan proposed that there be 33 ministers and two deputy ministers representing the various geographical locations in Libya.

The new government will replace the two rival administrations- one located in the East and another based in the west. the two administration has been ruling Libya since 2014.

KDRTV understands that the interim government will replace an UN-backed Government of national accord (GNA).

The UN-backed government has been in charge of Tripoli and western areas and competed with the eastern administration led by warlord Khalifa Haftar.

SO many dignitaries have congratulated Libya for the approach to collect the broken pieces in the country.

“What has happened today is an important step to end infighting and division, and we call on all to cooperate and unite for the sake of Libya and its renaissance,” Fayez Serraj said in a statement.

At the time, the US Ambassador to Libya Richard congratulates Libya for forming a unity government.

Ambassador Norland: “Like many Libyans, we watched the livestream of the historic HoR session in #Sirte. Congratulations on the formation of an interim unity government to set the stage for elections in December.” #Libya
Photo credit: @libyaalahrartv pic.twitter.com/VF8g5rLP2b

The UN Support Mission in Libya also congratulated the process.

1/3 UNSMIL congratulates the Libyan people on the approval of a new unified government and applauds the House of Representatives, its leadership and its members for coming together on this historic day and for upholding the interests of their country & people. pic.twitter.com/RnyuORF4xl

Libya has been torn by war after the NATO-backed military campaign overthrew longtime leader Moamar Gadafi.

Thereafter, the country has experienced war between Tripoli-based GNA and the eastern-based Libyan National Army (LNA) led by Khalifa Haftar.

The GNA has been backed by Turkey and Qatar, while LNA has been enjoying Russia, the United Emirates, and Egypt.