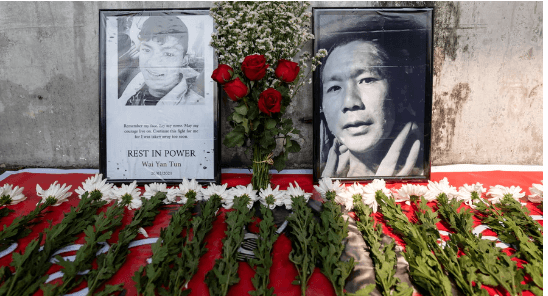 KDRTV established that so far, people were killed on Saturday as protestors continue to hold rallies across Myanmar.

The pair were killed after the police used live and rubber bullets, teargas, water cannons, and slingshots on the demonstrators.

The UN Secretary-General had faulted the dreadful violence against demonstrators.

“The use of lethal force, intimidation and harassment against peaceful demonstrators is unacceptable,” he said on Twitter late Saturday.

I condemn the use of deadly violence in Myanmar.

The use of lethal force, intimidation & harassment against peaceful demonstrators is unacceptable.

Everyone has a right to peaceful assembly. I call on all parties to respect election results and return to civilian rule.

The coup leaders have also reported that one police officer has been killed since the protests.

During Saturday’s violence, 20 people were wounded while the other 569 were detained.

The army accused him of encouraging the civil servants to join the demonstrations. The actor now faces two years in prison upon conviction.

The reports of his arrests were revealed by his wife, who said that the police came to their home and took him away.

“They forced open the door and took him away and didn’t tell me where they were taking him. I couldn’t stop them. They didn’t tell me,” Khin Sabai Oo said.

Many international communities and certain countries have imposed sanctions on Myanmar, including the US.

Through State Department spokesperson Ned Price, the USe said that the US is deeply concerned about the military’s actions on protestors.

We are deeply concerned by reports that Burmese security forces have fired on protestors and continue to detain and harass demonstrators and others in Burma. We stand with the people of Burma.

The Myanmar military, who took over the country and announcing a one-year-long state of emergency, alleged that the concluded elections were fraudulent sone that the election agency in the countries disputes.

The international communities, including the EU,, consider further actions against the Myanmar military coup leaders.