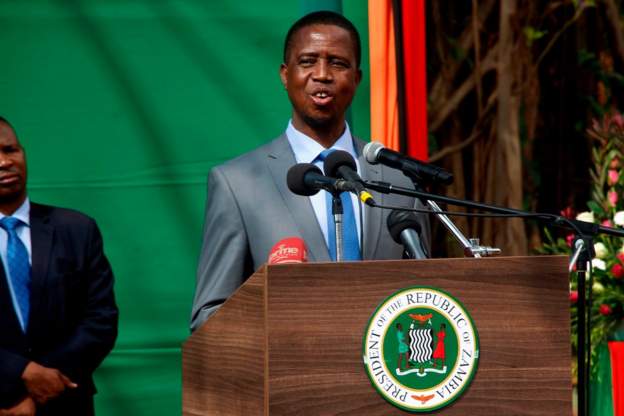 Reports indicate that the President was presiding over a 45th national defense day on Sunday when he experienced sudden dizziness and collapsed.

KDRTV learned about a statement from the Secretary to the Cabinet saying the President:

“is well and has continued to discharge his duties”.

Dr. Miti in the statement said that the president recovered immediately after the incident.

President Lungu reportedly has a similar health incident back in 2015 which the presidency said was due to an “esophagus condition.” Other reports indicate that during then, the president had a rare stomach disorder called achalasia.

The President has expressed his bid for re-election in the 12 August polls.

I AM OKEY, PRESIDENT EDGAR LUNGU

In a statement issued from State House, Dr. Miti disclosed that during the observation of the 45th Defence Force Day Commemoration and Investiture Ceremony, President @EdgarCLungu experienced a sudden dizziness but recovered immediately. #Zambia pic.twitter.com/zg6oPgpeQ4

Reports say that the President had walked off his own to the car and returned to the State House.

The Four-hour defense day ceremony was conducted in Lusaka`s Freedom Statute on Independence Avenue where the Defense Force exhibited their military intrepidity.

President Lungu used the event as the opportunity to honor the men and women in uniform.

Mr. Lungu became the President of Zambia after he was elected in the 2014 by-election following Micheal Sata`s death.

Lungu went on and emerged the victor in the 2016 polls.

Zambia`s prominent opposition icon Hakainde Hichilema is again considered to be his main political rival for the presidential race.

KDRTV notes that the landlocked southern African country has enjoyed relative political stability since it first established multi-party elections in 1994.

Zambia is currently struggling with amounting debts and the adverse impacts of coronavirus in the country`s economy.

The United Arab Emirates (UAE) had suspended flights from and to Zambia following the spike in coronavirus infections in the country.

The opposition leader Hakainde Hichilema had also urged Zambians to observe the cautionary measures to halt the spread of coronavirus.

Friends, let us all mask up, avoid contact and follow COVID-19 health guidelines. We are concerned about the rising infections and we urge you all to stay safe. We will get through it. pic.twitter.com/HqKF5yk2AD