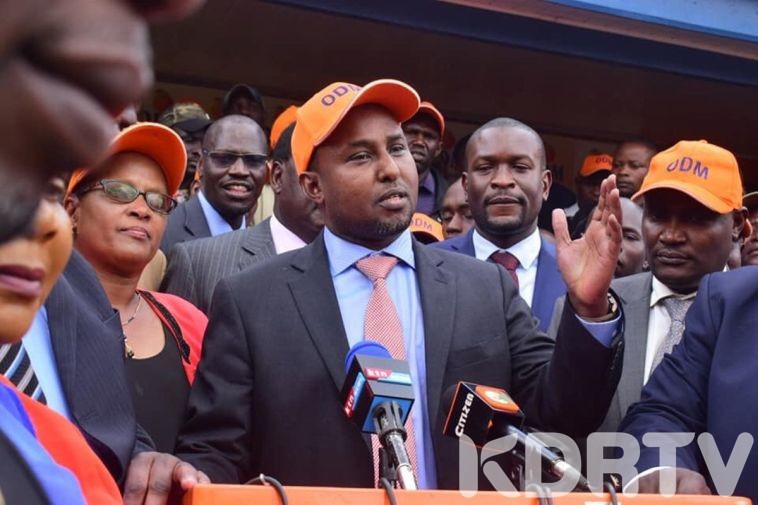 (KDRTV)-Suna East Member of Parliament (MP) Junet Mohamed has dared Deputy President to resign if he is mature enough.

A section of politicians led by National Assembly Minority Chief Whip Junet Mohamed and Kieni MPKanini Kega, asserted that DP Ruto is “openly” scheming a “coup” against the president

Junet was speaking during a presser where he read a joint statement on Tuesday, January 28, denouncing a two-day retreat coordinated by DPs close friends in Naivasha in which they outlined various demands

According to the Kieleweke politicians, the Naivasha meeting was aimed at soiling and scheming ways to choke Uhuru out of the presidency and which they referred to as childish behavior

“If the Naivasha meeting was surprising, it is the demand that came out that meeting which shocked all us. The meeting underlined the DP’s deceitful nature and corrupt tendencies.

He mobilized MP’s without having the decency to inform the president. The rationale of the Naivasha meeting was a dirty scheme by the DP to undermine President Kenyatta. The DP is portraying childish behavior through undermining the president,” he said.

During the retreat, the DP Ruto allied lawmakers obligated that the government set aside 5 % of national revenue to farmers to address certain challenges.

However, the Suna East MP Junet Mohamed dared the DP to resign from the government saying he initiated farmers’ problems after he selected his “corrupt friends”  to head the agricultural sector

“If he thinks he is mature enough, let him resign from government. He is responsible of the collapse of the agriculture sector where he served as minister and had his close allies. Ruto has been the single biggest stumbling block to agriculture sector in Kenya, where his handpicked corrupt friends have been in charge since Grand Coalition days,” he added.

“The party has no problem with such initiatives, needless to say, that freedom of association is enshrined in our constitution. However, for the avoidance of doubt, this is to clarify that such can not and will never qualify to be referred to as a parliamentary group meeting of the party,” said Secretary-General Raphael Tuju.