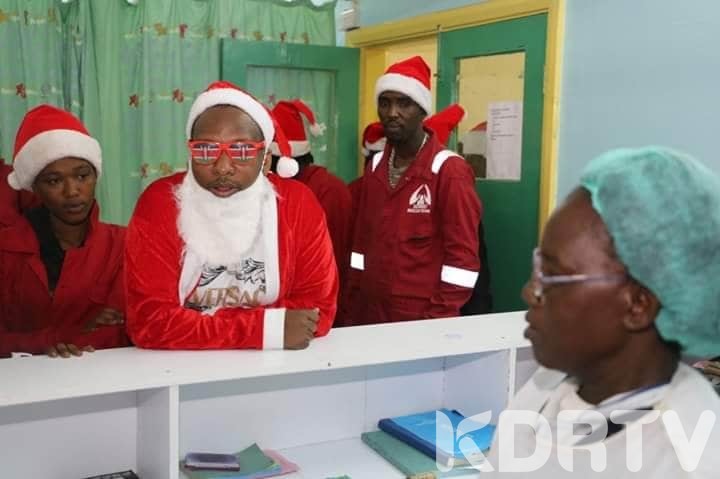 The Governor of Nairobi Mike Sonko has made the first public appearance since he was released from the bars by treating mothers with early Christmas gifts on Saturday, December 21 at Pumwani Hospital.

The governor’s visit ate the health facility ensued after his chaotic arrest in Voi on Friday, December 6, where he was later detained for five days after which he was charged with several counts including graft and abuse of office

The county chief has kept a low profile since he secured his freedom from custody.

The county boss on Saturday, December 21, arrived at the facilities dressed in Santa Claus suit and eyeglasses furnished with the Kenyan flag.

The governor, in the health facility, gave out some basins, diapers, and towels among other gifts, to mothers

While in the suit, the besieged governor advised Kenyans to remain generous to each other especially during this festive season when everyone in the world is in a Christmas mood.

“Watu wangu (my people) as we usher in this festive season to celebrate the birth of Christ Jesus, I wish to encourage you all to extend your generosity and kindness, however little, to your neighbors and community.

As Mother Teresa once said that it is not how much we give, but how much love we put into giving,” the Nairobi county boss wrote on Facebook.

In the post, Sonko disclosed that he was named as the Volunteer Champion of the year 2019 on December 5.

This follows after the governors were awarded another gift by the Good Deeds Day Foundation of Israel that pronounced Sonko as the Goods Deeds Day Ambassador for Kenya.

KDRTV understands that the governor was to appear in the Voi Court over assault case but failed as his legal team informed the court the Governor was very sick and that his doctors recommended that he should have some rest.

The police had reiterated that Sonko resisted arrest and injured a senior police officer during his dramatic arrest.