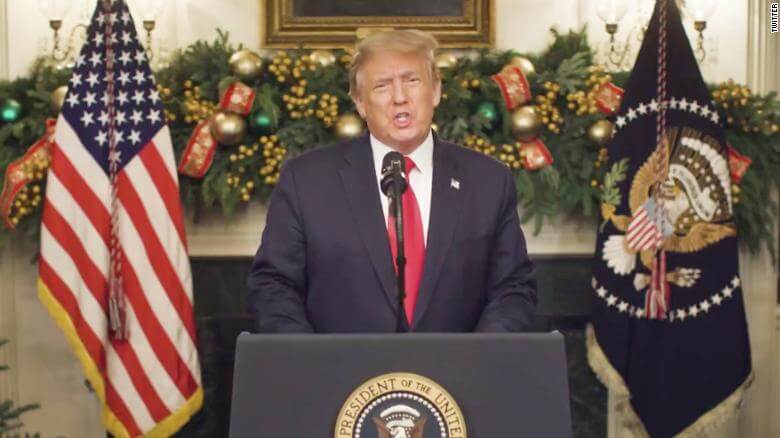 The president unveiled multiple items included in the newly announced covid-19 relief package and called the $900 Billion bill ‘disgraceful’. He called on parties to remedy the bill and increase payment to Americans for up to $2000, to remove all unnecessary and wasteful items such as 1,3$ Billion assistance to Egypt and the Egyptian military which will probably be used to purchase Russian-made weapons and defense systems.

The bill includes $85 million to Cambodia, $135 million to Burma, $505 million to Belize Costa Rica El Salvador, and Guatemala among other small countries in Central America.

$155 million to the National Gallery of Art, and even $2,4 million dollars to count the number of a certain bread of fish in the Gulf of Mexico.

The bill also includes $1800 to the families of illegal immigrants which is far more than what the average American family will receive as aid from the government.

Trump highlighted the package’s clear flaws in addressing real issues and business sectors that are severely impaired by the pandemic such as restaurants and struggling small businesses. The president perceives the bill to be the product of lobbyists, personal, and special interests and does not reflect the real needs of the American economy and population.

The speech came unexpected and was met with great enthusiasm from the public, Trump blamed China for the virus and comforted the hard-working people of America that this isn’t their fault, the situation is not of their own making. As is the custom, Trump took it to Twitter to fire up the base.

Thank you for listening to us & not signing it.

The bill cleared the house and the senate at lightning speed and with a massive majority, 359-53 in the House of Representatives and 92-6 in the Senate. Worth noting that Congress could override Trump vetoing the bill with a majority of two-thirds which are clearly there for the take.

Whether this was a typical publicity stunt from Donald Trump or not, his description of the bill’s minor items is questionable to the average person, to say the least, but from a major nation such as the US, lawmakers, and people familiar with the workings of Congress and government stimulus would say the bill is quite typical and normal.