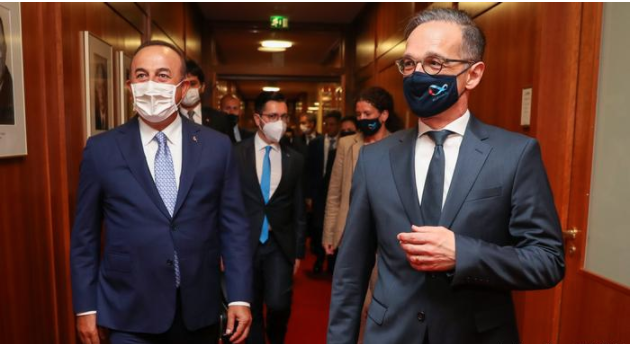 Tukrey Foreign Minister and German Foreign minster after the meeting

According to Turkish Foreign Minister Mevlut Cavusoglu, the country is ready for unconditional deliberations on the possibility of equitable sharing of resources in the maritime region

At the same time, Greece admitted to holding an unconditional talk to solve the simmering tension but not under threat from Turkey

However, after finalizing his visit to Greece and Turkey, he noted that the tension between member states of NATO has reached a critical stage

“What we need now and urgently is clear steps towards reducing tensions as well as a sincere desire to enter into dialogue. I have heard that all parties are ready for talks. And that is why we believe that goal can be achieved,” said Maas.

Turkey hailed German-led mediations but affirmed that it has displayed goodwill when it ended gas and oil exploration activities in the controversial region last month.

However, the Turkish Foreign Minister said that Turkey was forced to resume operations after Greece signed a treaty with Egypt to create a special economic zone in the disputed area

Greece is expected to compel regional leaders to impose sanctions on Turkey but EU nations are still hesitant for fear of offending Turkey, a key ally of NATO.

Greece has claimed that Turkey`s exploration of these resources is illegal, but Turkey maintains the area it uses its part of its maritime borders