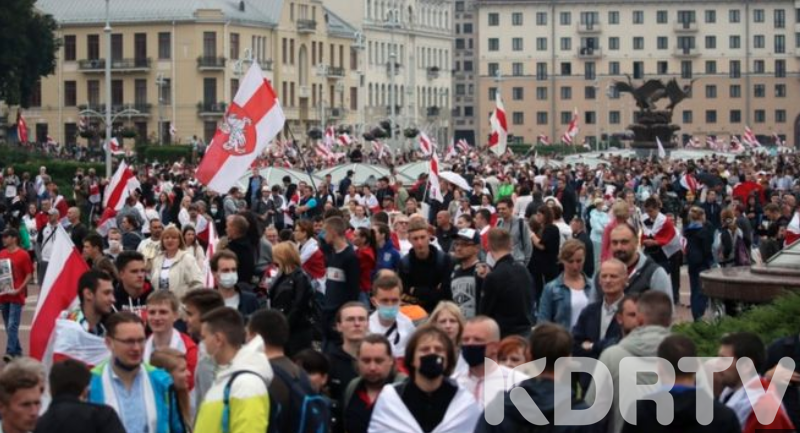 (KDRTV)-Opposition followers have held another huge demonstration in the capital Minsk compelling President Alexander Lukashenko to stand down.

This is barely two weeks after the supposedly fraudulent election was held in Belarus which gave Mr. Lukashenko another term in the office after ruling the country for 26 years

According to the protestors, Mr. Lukashenko stole the election and asked him to resign

Our earlier reports indicate that the long-serving president swore to restore peace and claimed that some “foreign powers” wanted to install a new president and that Nato was readying troops in the western border.

According to the Central Election Commission, Mr. Lukashenko was the victor with at least 80 percent of the votes in the elections that were held on August 9, 2020.

The opposition leader Svetlana Tikhanovskaya, according to the election body, garnered 10 percent of the votes, however, she dismissed the result publicly before departing to neighboring Lithuania a day after the exercise.

KDRTV notes that no independent observers we present during the elections.

The opposition supporters alleged mass rigging during the elections and have vowed to stand still until the end.

According to pro-opposition media, 100, 000 people took were involved in the protests, however, State television estimated the crowd at 20, 000.

According to reports by BBC, some protestors moved towards the “Her City” war memorial and the presidential palace but were barred by police before being dispersed

Similar rallies were also held in other Belarusian cities as Lithuania, Estonia and the Czech Republic made human chains in solidarity with the protesting people of Belarus.

KDRTV understands that President Lukashenko has been on receiving end from both local and international bodies who want him to stand down.

According to our recent reports, Pope Francis also urged the president to respect justice and the fundamental rights of the people of Belarus during rallies.

Since the commencement of protests in the country, four people have been killed and those detained by police have reported that they are being tortured