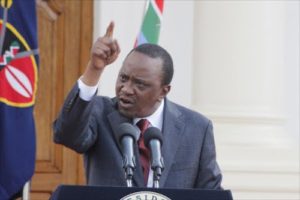 There is dissatisfaction among Azimio la Umoja associate parties in Mt Kenya region as the Jubilee Party, which is allied to President Kenyatta, is trying to rejuvenate itself.

The attempt by the ruling party to be the leading actor in the movement threatens to undermine the Azimio la Umoja alliance in the vote-rich region.

Among the Mt Kenya, political parties that are dissatisfied include The Party of National Unity (PNU), Devolution Empowerment Party (DEP), and the Ubuntu Peoples’ Forum.

The three parties are planning to have their National Delegates Congress (NDC) in Nairobi on Friday and Saturday before joining their counterparts at the Nyayo Stadium to endorse Raila Odinga.

The sticking point is planning to zone regions and conduct joint nominations, which the parties fear could jeopardize Raila’s strategy for marketing his presidential bid in the Mt Kenya region.

This is one of the measures the Azimio team is pursuing in order to avoid self-annihilation and to challenge Deputy President William Ruto’s United Democratic Alliance in the region.

“Nominations is nominations whether conducted jointly between candidates from different parties or within one party. No one should be fear joint nominations and we promise free fair and verifiable polls,” Laikipia Governor Ndiritu Muriithi told the Standard.