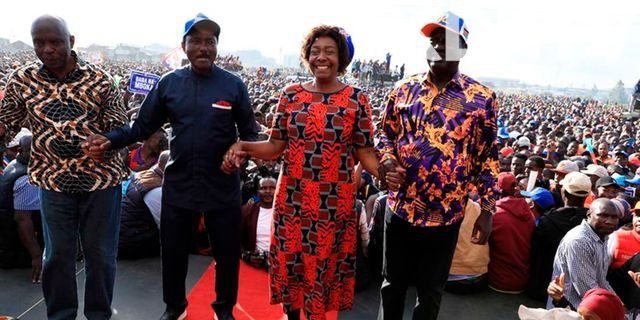 By retaining Kalonzo Musyoka and appointing Narc Kenya leader Martha Karua as his running mate, Azimio presidential candidate Raila Odinga has retained the majority of his 2013 and 2017 support base while also gaining support from Mt. Kenya. Due to the departures of ANC leader Musalia Mudavadi and Ford-Moses K’s Wetang’ula, he may suffer in Western.

According to figures from the 2013 and 2017 general elections, Kalonzo comfortably delivered more than 83 percent of votes voted in the three Ukambani counties of Machakos, Makueni, and Kitui to Mr Odinga.

The decision of the former Vice President to endorse Raila Odinga’s fifth attempt at the presidency also suggests that the August 9 elections could be won in the first round, as there will be no third force in the succession race to necessitate a runoff in the absence of an outright majority of at least 50 percent plus 1 vote.

However, some political pundits and DP Ruto supporters claim that because Musyoka is not on the presidential ticket, he may not be as influential as he was in previous votes. In the last two elections, Mr Musyoka was Mr Odinga’s running mate. They go on to say that, Kalonzo Musyoka has lost some followers due to his erratic behavior. Some of Mr Odinga’s traditional supporters have defected to DP Ruto, according to his opponents.

However, based on previous voting patterns, DP Ruto will need overwhelming support from both the Rift Valley and Mount Kenya to win, much as Jubilee did in the 2013 and 2017 elections.

A close examination of the two prior surveys reveals massive voter participation in the two regions, with an average of over 90%. This means that a split in the bloc or voter apathy in either region might be costly to Dr. Ruto’s campaign.

Also Read: Kalonzo Reveals What He Wants From Raila Before Rejoining Azimio