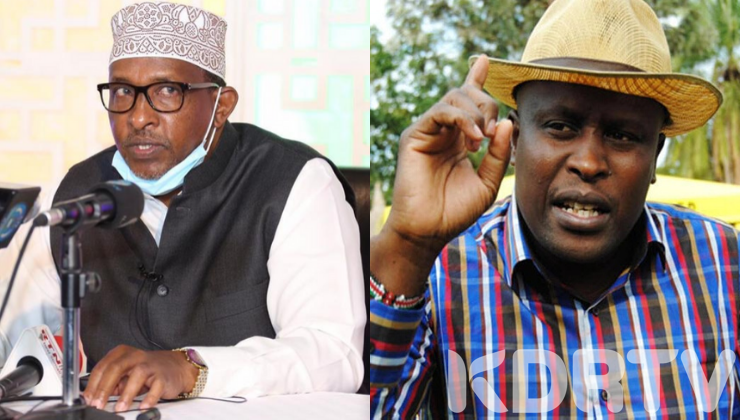 He alleges that Mr. Kega is using dubious means such us extortion, threats and blackmail to remove him from the position.

According to Duale, Kanini Kega is conducting his impeachment plot behind the Jubilee party and its leader president Uhuru Kenyatta whom he says exempted him from the recent party purge against party rebels

The Garissa Township legislature in his statement on Wednesday alleged that Mr. Kega is asserting to collect signatures from other law makers for his ejection against the National Assembly Standing orders

“He is notoriously known for being the king of extortion who thrives in threats and blackmail. He has perfected the art of extortion so well that all he does is to purport to collect signatures only for him thereafter to solicit for favors from myself and my friends as a bait for withdrawal of signatures,” said Duale.

“The National Assembly Standing Order 19 is clear on the process for removal of a Majority Leader which is by a majority of votes of all Members of the Majority Party in a Parliamentary Group chaired by the Party Leader and the decision thereafter is communicated by the Majority Whip to the Speaker. There is no place for collection of signatures.”

“What Kanini Kega is however doing is to lie to his colleagues through unknown procedures that he can still have a say in the removal process when he is just playing his usual extortion game,” Duale added

Duale at the same time said that Mr. Kega also thwarted the efforts of the House Committee on Trade, Industry and Cooperatives, the same way he did to him.

“Hon. Kanini Kega, please note that being a Leader of Majority is not as easy as ABCD. It takes zeal, hard work, servant leadership, expertise, professionalism, experience and having the people of Kenya in your heart,” Duale told the MP.

“Question is if you killed the Committee on Trade which you chair through incompetence can you handle the position of the Leader of Majority Party?”