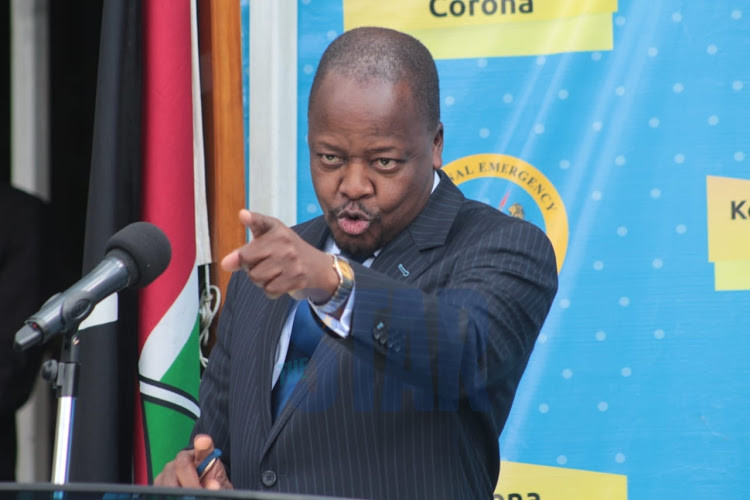 (KDRTV)-Cabinet secretary Mutahi Kagwe is a man under siege. He was once the darling and a true hero to Kenyans when he was appointed to the ministry of health. The people of central Kenya even though he is presidential material and God had given them a natural leader that will succeed president Uhuru in 2022.

The way he conducted himself and showed leadership in the ministry of health overshadowed the cabinet secretary for education, professor Magoha who looks lost with no clue on what to do with school-going children during this coronavirus pandemic.

However, that is all gone after a few months and the once hero is now a villain who is facing corruption charges especially after the suspended KEMSA CEO implicated him and His permanent secretary Susan Mochache.

Kagwe has, however, denied those allegations and said that corruption has a way of fighting back. The cabinet secretary last night posted a long message on his official Facebook page and reiterated his fight against corruption in the ministry is unbowed even though he sounded a worried man.

Here is what he posted that made Kenyans concerned about his state of mind;

There is no greater feat than that of nation-building. As our founding fathers would tell you, it entails creating institutional structures that support economic development while effectively addressing the sociopolitical, legal, and security considerations that support stability and state sovereignty.

These structures are constructed by the people they will serve; in Kenya and elsewhere, they coalesce around the languages and cultures that inform our collective aspirations and give us a national identity.

Six months ago, when I became Cabinet Secretary of Health, it was to these aspirations that I looked for guidance on how to best serve.

It was an open secret that notwithstanding a foundation rooted in the diligent, honest and ethical work of countless officials, my ministry was so wrought with corruption that it was denying Kenyans access to the quality and affordable healthcare they’re entitled to as a human right.

Addressing this menace became an instant priority. A sick nation cannot be a working nation and economies are built by the healthy, not sick.

Immediately I took office, I sought the assistance of the National Intelligence Service and the Ethics and Anti-Corruption Commission in conducting a thorough forensic audit of the Ministry and the parastatals that support it.

I did so out of the deep appreciation of the enormity and complexity of the task at hand and my instructions were laser-focused: Interrogate the supply chain and procurement process and juxtapose these against approved government accounting and auditing procedures.

Today, while many are expressing alarm at what is gradually being unearthed by bringing from darkness the ills that have been committed against us, I am celebrating it. As is my boss, President Uhuru Kenyatta.

As we see it, with each act of misappropriation, our nation slips further from achieving its Universal Health Care goals, which will be trans-formative to each Kenyan life.

It’s for this reason that I fully welcome and support the public interest and outrage at the allegations on the misappropriation of health funds; the reaction is justified and precisely what we need because public support is critical to our fight against corruption. Thankfully, it’s been overwhelming.

Since I took office, I’ve received an immense amount of support, which clearly illustrates the Kenyan state of mind and changing tide. An increasing number of us are unwilling to let the corrupt slip through the cracks – whoever they may be. To us, the fight against this menace is instinctive.

Shockingly, there are some dark quarters that are vehemently resisting the anti-corruption effort to the extent that they have waged a war of misinformation and sponsored protests guise as civil unrest to confuse and exploit the public for political gain.

Where else but in Kenya do leaders publicly condemn graft and then, with even more vigor, invest everything in denouncing and sabotaging the efforts to combat it? It is defeatist and unpatriotic; worse, it makes a spectacle of Kenya that undermines us internationally.

I am grateful that Kenyans are God-fearing and they know weaponizing health is immoral, non-Christian and an act that even the highest offertory cannot atone.

I wish to appeal to all Kenyans that believe in being their Brother’s Keeper to raise their attention to the fact that we’re in a period in which morals are clashing with political aspirations to the extent that our welfare and healthcare are directly threatened.

Simply speaking, this is our war, all of us, one that requires all hands on the deck and one that I and those in the Ministry who support me cannot win without the support of as many Kenyans as possible.

If you haven’t already, please understand my abhorrence for graft, join the fight at hand and keep abreast of our progress. A lot has been happening hence the theatrics playing out. When the broom sweeps, the dust rises.

Since being in office, my team and I have been working feverishly to effect the transformational changes our sector requires. In this period, the ministry has transferred no less than 90 staff, restructured the procurement personnel, suspended suspected staff to pave way for ongoing investigations, and sought replacements.

We are working tirelessly with the DCI and EACC to ensure that those with criminal liability – for violations in KEMSA and elsewhere, see their day in court. We are fully aware that this war needs more than vigilante tactics: It must be airtight and meticulously executed in order for us to secure true justice and we will replicate this in every office suspected of financial impropriety.

On a board level, we are recalibrating all the structures under MoH so that they are professionalized, meet international standards, and hold their members accountable for institutional performance.

Critically, we are institutionalizing cross-cutting transparency and accountability in the ministry because medical care is as personal as it can get with mental, physical, economic, social, and spiritual dimensions rolled into one.

When we are done, it will be impossible for our rogue officers to exploit court injunctions in order to extend tenure in the ministry despite being redeployed to a similar or higher desk within government; the cost of corruption will be so prohibitive that similar to every other government official, they comply with this standard procedure; one that’s proven to be an effective tool in curbing graft and those they are dealing with on the outside world will shirk these quick opportunities.

Thank you, President Uhuru Kenyatta; without your unwavering support in this, without your presence, the task would be untenable.

My commitment to Kenyans is that I will remain unbowed in my pursuit of a health ministry we can all be proud of. I’m carrying half the responsibility – – the clarity of thought, courage, the love of God and country – while you are shouldering the other half.

A nation’s success is not just predicated on the actions of its government but also on those of its citizens. Can I call on you to reject the notion that corruption is normal in government and therefore acceptable in its corridors of leadership? I hope so.

And if you’re willing to stand up, be counted, and go full throttle like me, then all we need is the confidence that the other stakeholders- – the legislation and judiciary – will stand with Kenya. Our health status matters and graft, being one of our worst diseases, needs remedy. We have the cure, God’s grace and we will administer it without fear or favor.