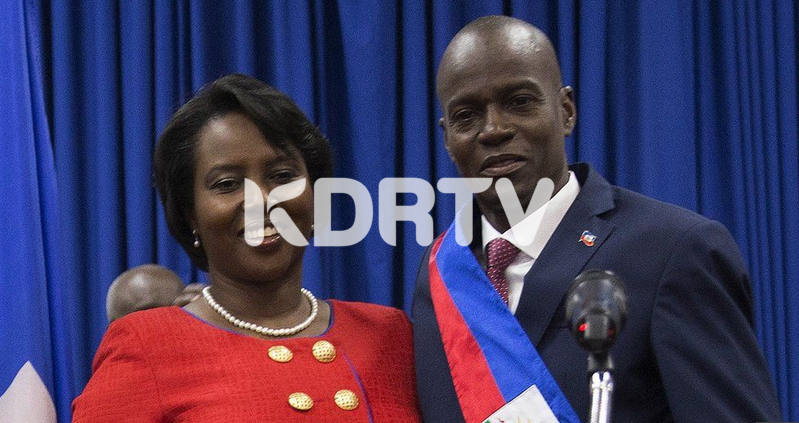 KDRTV NEWS: The widow of the assassinated Haiti`s President who was also shot has recorded a statement on Twitter.

Martine Moise said that the attack happened so quickly that her husband did not say a single word.

According to our previous reports, President Moise was killed on 7 July allegedly by 28 foreign mercenaries.

Martine Moise who was also shot and injured during the attack was flown to Miami for medication.

Mrs. Moise on Sartuday posted a voice message on Twitter vowing to carry on with her husband`s work. Many people have confirmed that the voice belongs to her.

“In the blink of an eye, the mercenaries entered my house and riddled my husband with bullets,” Mrs Moïse says in the recording

“This act has no name because you have to be a limitless criminal to assassinate a president like Jovenel Moïse, without even giving him the chance to say a single word,” she continued.

The president widow said that her husband was targeted due to political reasons. She mentioned the referendum on changes to the constitution which could have granted the president more powers.

She lamented that the people wanted to assassinate the president`s dream.

“I am crying, it is true, but we cannot let the country lose its way,” she added. “We cannot let the blood of President Jovenel Moïse, my husband, our president whom we love so much and who loved us in return, flow in vain.”

For political reasons, the late President Moise had many enemies.

It is still undetermined who is behind Wednesday`s attack.

A senior security official in charge of the safety of President Moise is due to be questioned next week.

The Haitian police said that the majority of the mercenaries were Colombians and two joint US nationals.

Three suspects had been killed by the police, seventeen detained after a gun battle in the capital Port-au-Prince.

The Columbian government has agreed to help Haiti with investigations.

Currently, it is not clear who is in charge of the poorest nation in America as interim prime minister Claude Joseph and a new appointee Ariel Henry both claim they are in charge.

The police however have vowed to find the key figure behind the Wednesday attack.