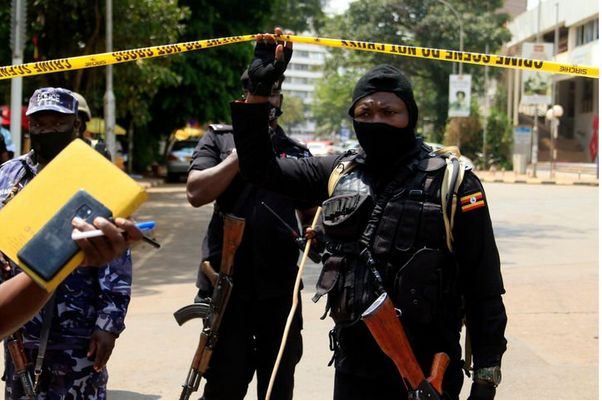 KDRTV NEWS: The government of Uganda has stepped up security, especially in the capital Kampala following the twin suicide bombing. The bomb claimed the lives of three while injuring dozens.

KDRTV established that the armed police and soldiers were patrolling the capital Kampala.

Several checkpoints have been set on the many roads in Kampala, and the scenes of the bomb attacks have been closed off.

It is reported that many of the people who were injured are police officers.

The Tuesday bomb attacks occurred within minutes of each other after two suicide bombers disguised as motorcycle taxi drivers denoted devices near a parliament building.

The attacks have been linked to the Allied Democratic Forces (ADF), an armed group in the Eastern Democratic Republic of Congo.

Many Ugandans working in Kampala have reported that they would not go to work as they fear for their lives.

Neighbors of Uganda, such as Kenya, are now contemplating on status of the security of Uganda.

Recently, Uganda has been experiencing suicide bomb attacks, something that is considered too severe for the country’s economy.

President Yoweri Museveni has urged Ugandans to check people at the entry points to the bus parks, hotels, churches, mosques, and markets.