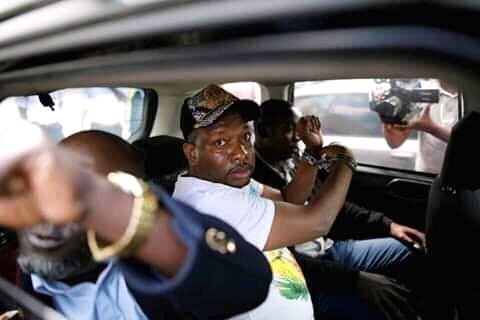 (KDRTV) – Embattled City politician Mike Sonko will spent at least two more nights in police custody before a ruling on his bail application on Thursday.

It all started when the Ex-Nairobi Governor honored summons to appear at DCI headquarters on Monday.

Detectives wanted Sonko to shade more light on claims he had made a political rally in January that he had worked with other state operatives to cause chaos after the 2017 elections.

However, according to a local daily, Sonko was not asked questioned related to these claims as detectives concentrated on some of the comments he had made about President Uhuru Kenyatta and his family.

Specificically, he was asked to explain his utterances linking the family to corruption scandals in the country.

Sonko has severally accused President Uhuru Kenyatta and his family of meddling in the affairs of Nairobi County. He claimed that one of the President’s sisters tried to influence the nomination of Deputy Governor at City Hall.

In one of his signature moves, Sonko leaked an alleged recorded phone conversation between himself and the sister.

The animosity between the former County boss and the President has turned into a full fledged war of words after Uhuru revealed that he was behind Sonko’s Impeachment.

Last weekend, Uhuru claimed that he had to get Sonko out of City Hall because he was wearing goggles instead of working. This prompted a sharp counter from Sonko, who claimed that it is Uhuru who taught him how to wear the said goggles.

In the end, Sonko was arraigned in court and charged with robbery with violence. He allegedly committed the crimes in 2019 but detectives kept the file for future reference.

The prosecution wants Sonko denied bail because investigations have not concluded and the politician can interfere with witnesses.

They also want him to be presented to a Mombasa court where he is facing other cases, in which a warrant got his arrest has already been issued.