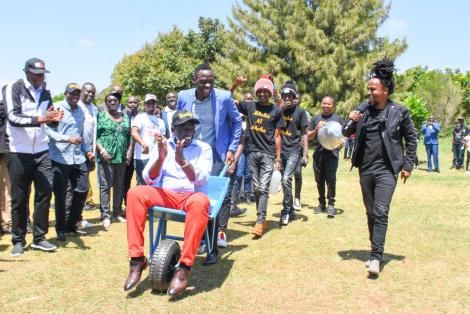 (KDRTV) – Deputy President William Ruto was nowhere at the Jomo Kenyatta International Airport (JKIA) when his boss President Uhuru Kenyatta jetted off to France on Tuesday.

Ordinarily, the man from Sugoi would see off the President and assume the role of running the country when his boss is away. But that seems long ago, as the current Ruto looks more like a man in the opposition than in government.

As Uhuru flew to France to borrow more money, his deputy was pictured dancing to a gengetone tune and riding on a wheelbarrow at his Karen residence. Does the constitution allow him to campaign at the official residence of the DP?

Ruto’s absence at JKIA was the second time in a row, that he has ‘disrespected’ his boss after missing the COVID-19 conference at KICC on Monday despite being invited. His seat was embarrassingly removed from the conference a few minutes after the President had arrived.

Is this the biggest sign that the man from Sugoi has ‘resigned from government’ and is only interested in charting a political path towards 2022. Or is Ruto getting back at his boss for not delegating any duties to him as the principal assistant?

Matiangi is now the un-official Deputy President and could even be running the government in the absence of the President.

But how did we get here? How did Ruto fall so far from grace? Should we blame the President or his deputy for the fallout?