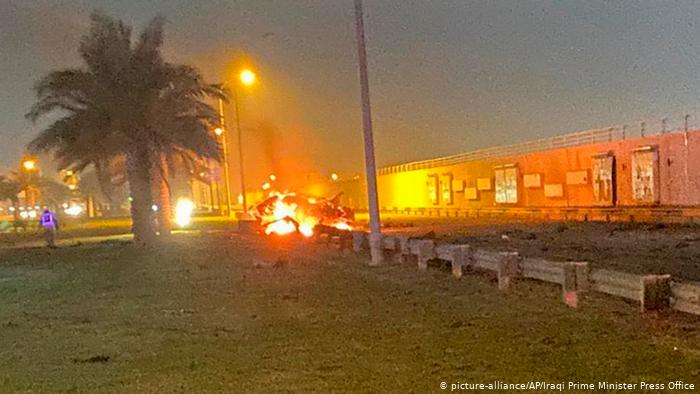 KDRTV NEWS: The US Secretary of State Antony Blinken said that airstrikes on pro-Iran fighters should send a strong message not to attack the US forces.

However, Baghdad has condemned the overnight aerial assault.

The airstrike was the second deadliest US strike during the administration of President Joe Biden.

The recent airstrike, which we described as retaliatory, has emerged fears of a new US-Iran frosty ties.

There have been flattering efforts between Iran and the US to revive the multilateral deal over Tehran’s nuclear program.

The second such deadly raid on pro-Iran targets since US President Joe Biden took office, described by the Pentagon as “retaliatory,” has sparked fears of a new US-Iran escalation amid faltering efforts to revive a multilateral deal over Tehran’s nuclear program.

“This action in self-defence… sends a very important and strong message,” Blinken told reporters on a visit to Rome.

“I would hope that the message sent by the strikes last night will be heard and deter future action,” he added, referring to repeated attacks against US interests in Iraq that Washington blames on pro-Iran groups.

But Iraq’s Prime Minister Mustafa al-Kadhemi condemned the US strikes as a “blatant and unacceptable violation of Iraqi sovereignty and Iraqi national security”.

“Iraq reiterates its refusal to be an arena for settling scores,” Kadhemi added in a statement, urging all sides to avoid any further escalation.

An Iraqi paramilitary alliance that includes several Iranian proxies and the main power broker in Baghdad reported that the attack killed four of its fighters in the Qaim region, near the border with Syria.

Iran authorities said that the fighters were stationed there to stop jihadists from entering Iraq.

However, they denied claims by the United States that they have been attacking the US forces.

“We reserve the legal right to respond to these attacks and hold the perpetrators accountable on Iraqi soil,” the Hashed said.

The US authorities reported that three military facilities were attacked during the strike.

KDRTV established that the strike targeted operational and weapon storage facilities at two locations in Syria and one in Iraq.

The US claimed that the Iran-backed militias had attacked US personnel and facilities in Iraq using unmanned aerial vehicles (UAV).

More than 2500 US troops were deployed in Iraq as part f the international coalition to fight the jihadist Islamic State group.

The US troops have been targeted more than 40 times this year by Iran-backed factions pressing Washington to withdraw from Iran fully.