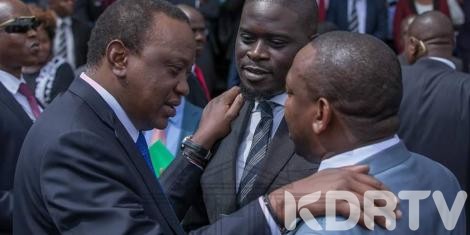 Nairobi Senator Johnson Sakaja has piled more pressure on embattled city boss Mike Sonko after claiming on live TV that he is ready to replace him in the hot seat at City Hall.

Mike Sonko is facing more than 10 c0unts of corruption and misuse of office charges in court. Last week, Anti-Corruption Magistrate Douglas Ogoti released him on tough bail conditions which barred him from office because it is considered a crime scene and he can interfere with witnesses and evidence.

The court order means that he cannot  execute duties that require him to be at City Hall such as chairing an executive committee meeting, receiving delegations or signing Bills

The governor’s woes are further compounded with the fact that he doesn’t have a deputy. He failed to replace Polycarp Igathe who resigned in February last year, citing that he had failed to earn the trust of his boss.

City Hall is in a crisis and there is a possibility there might be a by-election to solve the leadership stalemate in the biggest city in East and Central Africa.

Sakaja has said that he won’t mind vying for the governor’s post if Nairobians force him to.

“I was elected to be a Senator. However, if the people decide that they want me, I would go for it [governorship],” said Mr Sakaja on K24’s Punchline Show.

.@SakajaJohnson: If people of Nairobi want me to vie for Governor I will go for it but for now I must continue playing my role as a senator unapologetically. #Punchline pic.twitter.com/vVpfrhJeFK

This is the first time that Sakaja has publicy declared his interest in the coveted governor’s post. He said Nairobians need services and a by-election may be necessary to solve the crisis.

“For me, it is about getting Nairobi moving. I am on record talking about the position of the deputy governor. Nairobi must work. It has 17 constituencies and millions of people require services,” he said.

Despite the court order, Sonko and his lawyers insist that he is still in charge of Nairobi County. He said the court order only bars him from accessing his office but he can still discharge his mandate.