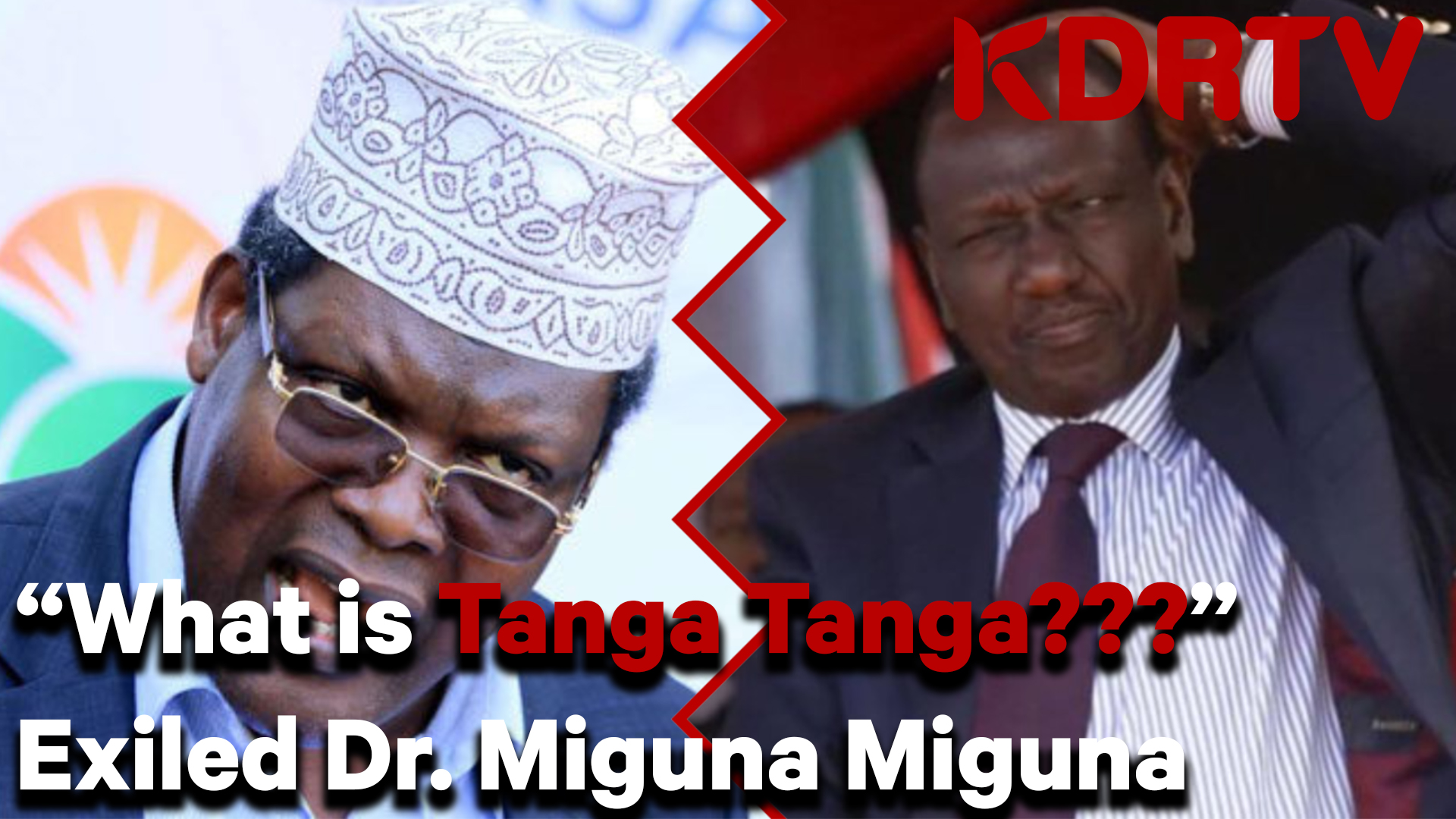 (KDRTV) – Exiled lawyer Miguna Miguna has dismissed claims that he has joined Deputy President William Ruto’s Tanga Tanga faction, claiming that the DP does not match his level.

In an exclusive interview with KDRTV on Sunday evening.

Great interview, General. Thank you @KDRTVKenyaNews for the great service you continue to do for Kenyans in the Diaspora. We look forward to next week's session with @MigunaMiguna and other Diaspora candidates!

@KDRTVKenyaNews goes live One on One with Dr. Miguna Miguna in an exclusive KDRTV live interview.

Send in your questions using #KDRTVlive and get them answered live by Dr. Miguna

The famed lawyer said that Ruto might be richer now but he was singing in the Christian union when he (Miguna) was a student leader during their time at the University of Nairobi.

READ ALSO: Details! Why DP William Ruto Has Been Kicked Out Of Jubilee Asili Centre

Both Miguna Miguna and Ruto were at UoN sometime between 1986 and 1990. The Canadian based lawyer, was the treasurer of the student union in 1986/87 academic year. However, he was expelled in 1987 following a fall-out with the administration. He was given political asylum by the Canadian government after falling out with the Daniel Arap Moi administration.

On the other hand, Ruto graduated with a BSc in Botany and Zoology in 1990 and joined the Moi administration as part of the Youth for KANU (YK-1992) movement. He has been in politics since that period.

Miguna has declared his candidature for Nairobi gubernatorial by-elections, slated for February 18, 2021. He says that he is overqualified if the grounds on which city dwellers voted for former governor Mike Sonko are anything to go by. Sonko is neither qualified to tie Miguna’s shoelaces or chauffeur him.

In 2017, Miguna was the only candidate with a manifesto. He has plans to ensure Nairobians have access to water, infrastructure, and a good transport system.

“I want to bring subway systems to Nairobians so that citizens cannot be reduced to wild animals traveling with vehicles on the streets which is very dangerous. Nairobi residents need a public transit system because Matatus are very dangerous,” Miguna said.

Miguna Miguna speaks after endorsement to vie for Nairobi governorship in absentia pic.twitter.com/UGYuZUoaRH

He also promised to eradicate slums and create jobs for city residents.

It is not clear how Miguna plans to achieve all this as he has been blocked from entering the country since his controversial deportation in 2018. Miguna was deported to Canada after he swore-in ODM leader Raila Odinga in January 2018. Efforts to return back home have proved futile despite the courts issuing several orders in his favor.

Relax, Dr. @EAukot. This revolutionary train has left the station. We are prepared to wait for you at the next stop, but you better hurry up, chief. We are marching on with all patriots, freedom fighters and revolutionaries. Nairobi must be liberated. Viva! #CartelsMustFall https://t.co/YxzZSt4IFL

Asked about Kenyans’ peculiar voting behavior, where they have ended up electing people with questionable characters, Miguna said he cannot blame the electorate because they always don’t have choices on the ballot. They are forced to choose between a group of cartels.

Subscribe to watch latests videos
In this article:Headlines, Miguna Miguna